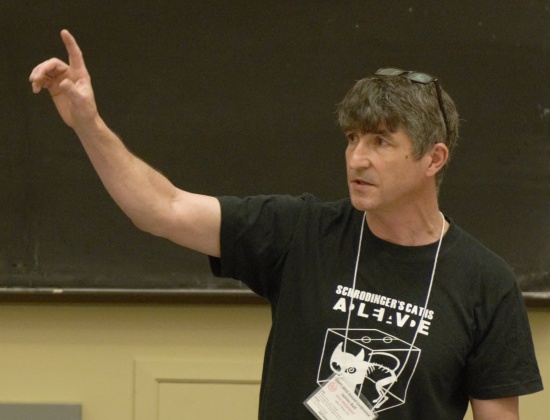 Congratulations to James Ball, winner of the
Irwin Talesnick Award for Excellence in Teaching

A physics teacher from Guelph’s John F. Ross CVI has won a prestigious award, recognizing excellence in the teaching of science. James Ball will be awarded the Irwin Talesnick Award for Excellence in the Teaching of Science by the Science Teachers’ Association of Ontario (STAO) this November at the STAO’s annual conference.

Among the many requirements of the recipient of the STAO award are unique and extraordinary accomplishments in teaching science to students in the province. Ball’s colleagues and students attest to his dedication and passion both in and out of the classroom.

Former students recall Ball’s lessons as fuelled by passion and creativity. They also praised Ball’s ability to take complicated subject matter and present it to each student in a unique and effective way.

“Knowing how to teach well is a gift. Some people have a natural passion and dedication that just push them to go above and beyond what they are required to do – there aren’t any words to truly describe it – but that was Mr. Ball,” said former student Anita A., who is now studying biochemistry at the University of Guelph.

“In his classroom he transforms physics into an enthralling, enjoyable expedition through time,” said Martha Rogers, Director of Education at the Upper Grand District School Board. “He is constantly experimenting to discover more creative, engaging, and effective means of transferring knowledge.”

This May, Ball was awarded the 2015 Canadian Association of Physicists Award for Excellence in Teaching High School/CEGEP Physics, for his “mastery at recognizing how individual students learn best,” his “extraordinary personal engagement of students in class,” and “his contributions in physics education beyond the classroom.”

He was a facilitator at the Perimeter Institute of Theoretical Physics’ EinsteinPlus workshops, and has taken on a leadership role in the PI’s teacher network.

“[He] is a fabulous teacher who has not only endeavoured to grow his own teaching expertise, but has also become a pedagogical leader, helping to shape physics education in Ontario and beyond,” said Greg Dick, Director of Educational Outreach at the Perimeter Institute.

When asked about the Irwin Talesnick Award, Ball said it was a particular honour, as Talesnick was his professor at teacher’s college. The award will be presented to Ball on Nov. 13 during STAO2015 in Toronto.